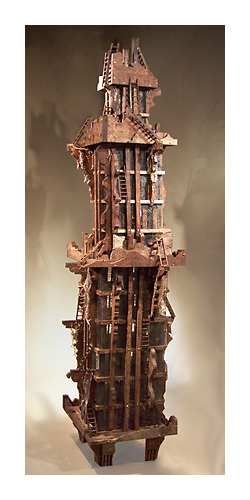 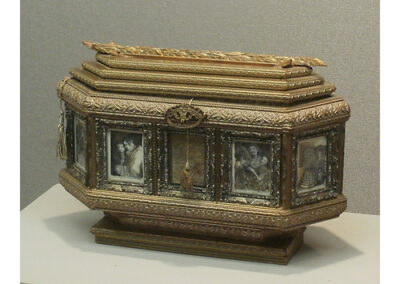 The elements in these objects are not to be viewed only as ornamentation, and the details within the works should be carefully considered, as they are intended to convey message. These mimetically stated, symbolic objects have an even richer abstract metaphorical language inherent in their shared use of the materials and in the content of the craft used to produce them. As objects, they have a familiar formal and informal ritual base. This combination of commonly used objects, enhanced by aged surfacing and underlying message, offer the most possibilities for exploration of visually communicating the emotional and for providing increased content readability. With a likeness in character between the form choice and the content, the related visual and written parts of these works are accessible and can, I believe, produce associations from common experiences found within the interactions of many families, especially in the South. In these works, an understanding of a settled generation past and the very real and transient present, with its emotional and ethical struggles, join and give support to each other in this separation. Both magnify the continuum of the universal, leveling effect of time on all who long for an everlasting reunion.